The aim of this project, which is co-financed by the European Commission’s LIFE Programme, is the agrochemical remediation of farm soils by combining solarisation and ozonation techniques. During the project execution, it is being assessed the influence of ozonation technology in pesticides soil content, the population of soil biota (nematodes and microorganisms) and its consequences on the performance of agricultural crops. 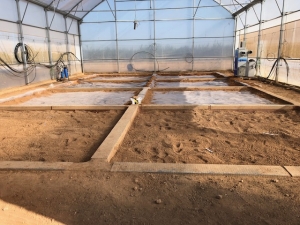 Results have showed a higher efficiency in treatments conducted with ozone, particularly when it is applied under soil surface. Pesticide degradation ranged from 10-20 % for control and solarisation treatments, 40 %

when ozone was applied in superficial or deep mode and 70% when the ozone was applied simultaneously in both ways, superficial plus deep. With respect to ozonation influence in soil biota, results indicate that, although the applied ozone may have certain negative effect in microbial biomass level, it did not affect to soil enzyme activities related to biogeochemical cycles and nutrients and increased the degradation of labile fractions of soil organic matter. More importantly, ozone did not affect the total content of soil organic carbon, which is fundamental indicator of soil quality and health. 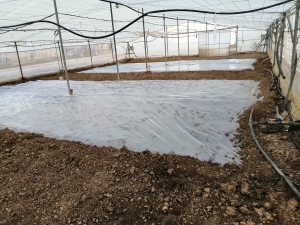 After these promising results, the prototype was moved away from Torreblanca experimental farm to Cuesta Mula farm (Águilas, Murcia), a commercial plantation owned by Expo-Aguilas co-operative and dedicated to tomato crop, where we will continue testing its operation and performance in real farm conditions.

news in the media about Agremso3il
Scroll to top