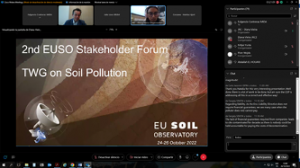 After the publication of the EU Soil Strategy and with the EU Soil Health Law being developed, the European Commission has confirmed the paramount importance of healthy soils and their crucial role in tackling major societal challenges such as climate change, biodiversity decline and food security. Building on the EU Soil Strategy, the EU Soil Health Law is expected to include legally binding obligations to achieve healthy soils in the EU by 2050. In this context, the EU Soil Observatory (EUSO) is convening its second Stakeholder Forum, an annual event organized by the JRC whose purpose is to actively engage and exchange with the soil community, in a broad sense – from policy makers, soil and soil-related scientists, local actors, civil society representatives and citizens. This on-line event took place from Monday 24th to Wednesday 26th October 2022.

The EUSO aims to become the principal provider of reference data and knowledge at EU-level for all matters relating to soil. It is a dynamic and inclusive platform that supports EU soil-related policymaking by providing knowledge and data flows needed to safeguard and restore soils. EUSO is in close interaction with the soil-related research activities and aims to raise the public’s awareness of the need for soil protection.

Several themes were updated during EUSO second Stakeholders Forum: the latest developments in soil policy, the state of soil science, new and ongoing soil research projects as well as methods to assess soil health in the EU and beyond. Fulgencio Contreras (IMIDA), as LIFE AGREMSO3IL representative, explained the Project objectives and achievements during the Soil Pollution Session. 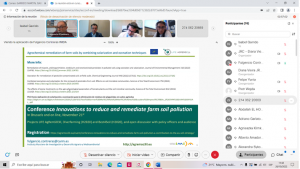 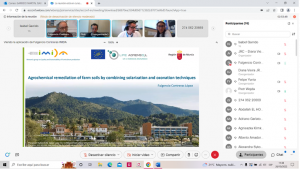