You are here: Home / Scientific publications

This work is the first ever study under field conditions for the removal of different classes of pesticides from soil using ozonation as a remediation technique. Initial assays were conducted with three different soil matrices to assess the effectiveness of the methodology under lab conditions. Field scale experiments were carried out on plots located in a greenhouse during the winter of 2020. The polluted soil was exposed to different treatments to test the effect of the mode of ozone application on pesticide degradation (S: polyethylene film covering, SOS: polyethylene film + surface ozone application, SOD: polyethylene film + deep application, SODS: polyethylene film + dual application, and C: no treatment). Ozonation impact was also assessed by variations on physical–chemical characteristics of the soil. Higher degradation was detected in ozonized soils, particularly in the SODS treatment, where ozone was dually applied on the surface and deep. During monitoring of remediation experiments, 15 of the main transformation products (TPs) were found. The results suggest that ozonation has favourable prospects to be considered a credible alternative technology for remediation of pesticide polluted soils. 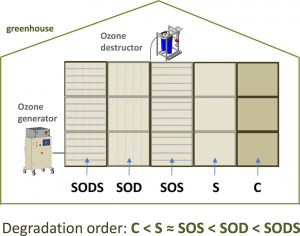 This study aimed to investigate the effectiveness of ozonation and solarization techniques for the removal of different types of pesticides from soil during the summer season. The effect of two experimental parameters (temperature and ozone application mode) on the pesticide degradation was evaluated. The results showed that solarization (S), solarization with surface ozonation (SOS), and solarization with deep ozonation (SOD) enhanced pesticide degradation rates in comparison with the control (untreated soil, C). The triazole, anilinopyrimidine, strobilurin and neonicotinoid pesticides showed similar behaviour under S and SOS conditions. The highest decrease was found in SOD, indicating the significant effect of temperature and ozone application mode on the efficiency of the ozonation treatment. Thus, a higher soil temperature and a longer accumulated time at high temperature in treatments S, SOS and SOD were observed due to solarization process. In addition, the removal efficiency was enhanced with exposure time. Finally, the main 15 transformation products were identified during SOD treatment. The results suggest that solarization combined with ozonation techniques allows decontamination of soil containing pesticide residues.

Pesticides have been used extensively in agriculture to control pests and soil-borne diseases. Most of these pesticides can persist in soil in harmful concentrations due to their intrinsic characteristics and their interactions with soil. Soil solarization has been demonstrated to enhance pesticide degradation under field conditions. Recently, ozonation has been suggested as a feasible method for reducing the pesticide load in agricultural fields. However, the effects of ozonation in the soil microbial community have not been studied so far. Here, we evaluate the combined effects of solarization and ozonation on the microbial community of a Mediterranean soil. For this purpose, soil physico-chemical characteristics and enzyme activities and the biomass (through analysis of microbial fatty acids) and diversity (through 16S rRNA and ITS amplicon sequencing) of soil microbial communities were analyzed in a 50-day greenhouse experiment. The degradation of the pesticides was increased by 20%, 28%, and 33% in solarized soil (S), solarized soil with surface ozonation (SOS), and solarized soil with deep ozonation (SOD), respectively, in comparison to control (untreated) soil. Solarization and its combination with ozonation (SOS and SOD) increased the ammonium content as well as the electrical conductivity, while enzyme activities and soil microbial biomass were negatively affected. Despite the biocidal character of ozone, several microbial populations with demonstrated pesticide-degradation capacity showed increases in their relative abundance. Overall, the combination of solarization plus ozone did not exacerbate the effects of solarization on the soil chemistry and microbial communities, but did improve pesticide degradation.