You are here: Home / news agremsoil 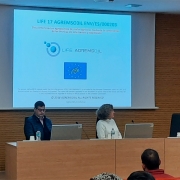 On March 2nd, AGREMSOIL participated in the ANUKIS workshop, organized by the University of Almería and the Research Center of Solar Energy, CIESOL. The project objectives and recent results were explained to the attendees and also to the audience connected to this hybrid webinar.

ANUKIS project is aimed to develop a new solar technology for the treatment of wastewater and its safe reuse, innovating in the simultaneous elimination of both chemical contamination and microbial pathogens, according to Regulation 2020/ 741 of the European Parliament and the Council of Europe to stimulate and facilitate the reuse of water for crop irrigation. Its main impact is “the design, construction and evaluation of a new continuous flow reactor for solar photo-Fenton on a demonstrative scale in a real operating scenario”. The project is developed in the wastewater treatment plant ‘Uleila del Campo’, as an example of the application of regeneration treatments in small towns since is in the interior rural areas where populations are more affected by water scarcity.

The exchange of information and results regarding the uses of oxidation processes has encouraged both projects’ partners to explore possibilities of further projects in the field of environmental effects of agriculture. 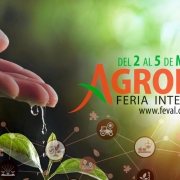 Novagric attended the Agroexpo 2022 International Fair, which took place in Don Benito, Badajoz from March 2 to 5, as a part of the LIFE AgremSO3il project dissemination plan.  The fair is dedicated to agriculture and stands out as one of the key events within the sector for its extensive program of technical workshops.

The Fair has been used as an opportunity to present the Agremsoil Project to different potential partners who have expressed very much interest in the topic. 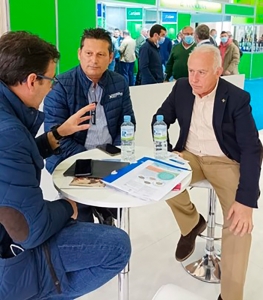 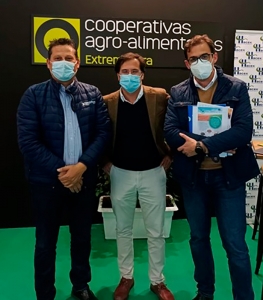 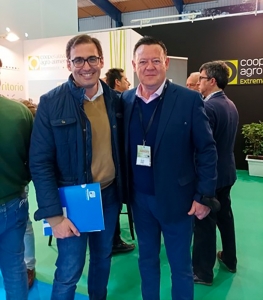 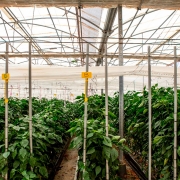 Soil biodiversity is key to maintain ecosystem services and soil fertility. However, the huge soil microbial diversity is affected by agricultural practices such irrigation, fertilizers, pollutants, etc. Among them, the accumulation of pesticides in soil is a threat in global agriculture. The LIFE AGREMSO3IL has suggested the use of ozone in irrigation water as a strategy for fostering pesticide degradation. Ozone is an oxidant and biocide molecule that could potentially affect to soil biodiversity and their key functions related to soil fertility. 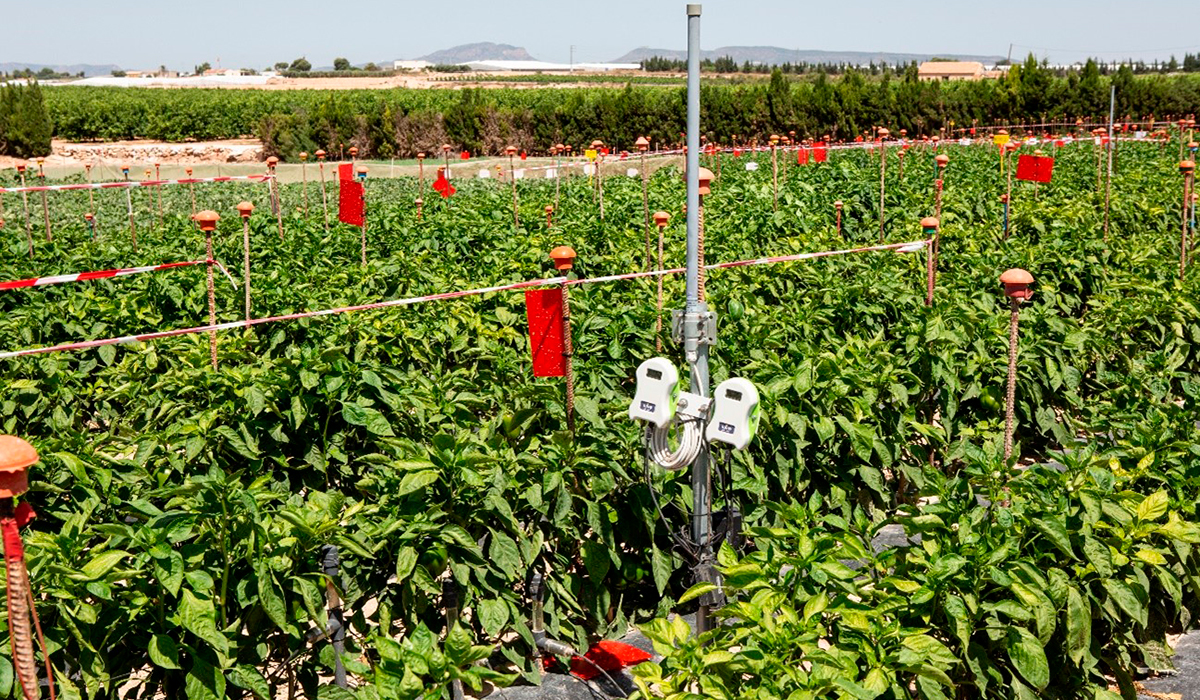 The recent study lead by CEBAS-CSIC have preliminarily revealed that the irrigation with ozonated water does not decrease the content of soil organic carbon, a key indicator of soil sustainability in Mediterranean agroecosystems. Nevertheless, results suggest that this type of irrigation contributes to the partial degradation of organic matter and the release of bioavailable forms of carbon and nitrogen in soil. These results are in agreement with the observed increases in soil enzyme activities which are intimately linked to nutrient cycles. These increases are also related with the variations in the biomass of the soil microbial community. At plant level, results showed that ozonated water caused a greater photosynthetic rate and fruit quality in tomato crops. These results are preliminary and further research would extent the knowledge on the potential effects of ozonated water in soil-plant systems. 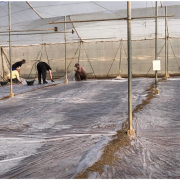 The project LIFE Agremso3il aims at the remediation of pesticide residues in farm soils using a combination of two technologies: ozone and solarization.

In June 2020, the AGREMSO3IL prototype was transferred from Torreblanca experimental farm to “Cuesta Mula” pilot farm in Águilas (Murcia). This commercial farm is placed in a representative area where tomato is a traditional important agricultural product, and belongs to the co-operative Expoáguilas, formed by 70 farmers.

Two essential developments of the project were carried out in the pilot farm in order to test and demonstrate the prototype operation and performance in real farm conditions. The AGREMSO3IL system is applied in two phases. Firstly, before the crop is planted, ozone is applied together with solarization during 40 to 60 days. The soil surface is covered with a polyethylene film and ozone is applied using pipes placed both on the soil surface and buried 10 cm into the soil. Then, ozone is supplied in the irrigation water, along the crop cycle.

The first trial was conducted in a 1,000 m2 greenhouse under plastic, starting with the solarization phase on July 8th. The cultivation phase of tomato crop started in September 2020 and lasted until April 2021. The preliminary results show that the application of AGREMSO3IL produces the degradation of pesticide residues in soil about 63%, when the elimination of these pollutants in the control soil (without any remediation treatment) was insignificant. The remediation effect of AGREMSO3IL is mainly due to the high oxidative power of ozone together with the high temperatures reached under the plastic film.

Regarding the effects on soil microbiota, the application of ozone in irrigation water favoured almost all microbial groups, perhaps by enhancing the degradation of compounds present in the soil matrix that microorganisms could assimilate easily. Likewise, some enzyme activities were enhanced by the ozone treatment, thereby favouring biogeochemical cycles. The application of ozone in irrigation water affects the nutritional, physiological, and yield status of tomato plants. Some of these effects are positive, since the fruits produced with ozone treatment are slightly better quality than those produced by the control.

The second demonstration activity started in May 2021 in a plot under net located in the same farm. After the solarisation + ozonation phase, the new tomato crop was planted in July. The effects of the treatments are now under monitoring up to the end of the season, foreseen in May 2022.

The results obtained by the project have shown that the AGREMSO3IL system produces the degradation of the pollutants accumulated in the soil for years in a notably shorter time, reducing threats and risks to environment and human health. 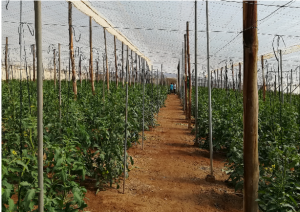 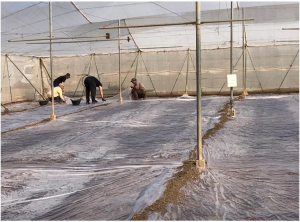 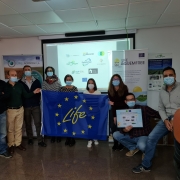 With the aim of fostering cooperation and networking among different European projects which are being carried out by CEBAS-CSIC and IMIDA, the partner meeting took place on November 23, 2021 at the premises of CEBAS. The goal was to disseminate the results and establish potential links between the ongoing projects. The participants have agreed that the networking and similar meetings could generate new ideas and projects in the future. The following projects were presented: 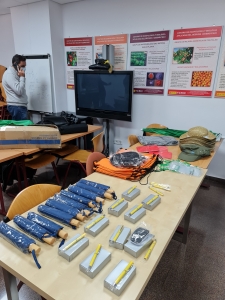 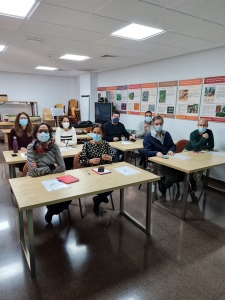 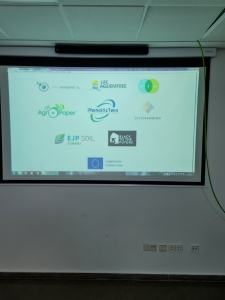 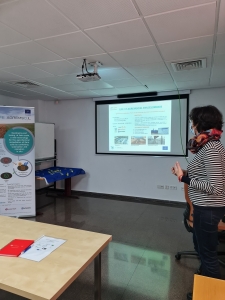 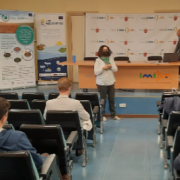 Participants of iWATERMAP project visited IMIDA facilities on 4th November. This project, financed by Interreg Europe funds, focuses on supporting the innovation policies in water technology sector, helping to increase the critical mass of innovation ecosystems in partner regions in this sector.

The visit also included an event where LIFE-AQUEMFREE and LIFE-AGREMSO3IL results were shared with the attendants. 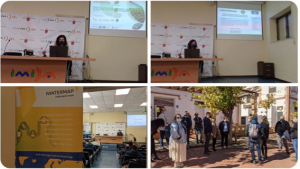 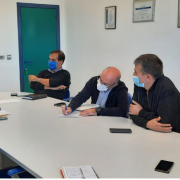 On 4th November, representatives of the LIFE-AGREMSO3IL project held a meeting with José Rosa Cardús and Fulgencio Wadi Aguilar, Operations Manager and Quality & Environment Coordinator of FRUCA Marketing, S.L., respectively, to discuss and schedule the tasks to be carried out by each participant in the replication essay that will be conducted in one of its farms next summer.

This company was originated in 1986 when it began distributing fresh vegetables and citrus fruits. Since that time it has become one of the market leaders in Europe with 6 product ranges: lettuces, endives, melons, watermelons, citrus fruits and capsicums. It controls the supply chain, from seed selection to the arrival of final products at the destination markets. Fruca Marketing holds the European cross-check EMAS III based on rules CE/1221/2009. Its strong environmental commitment is displayed by the optimization of production processes in order to reduce environmental impacts and make a more effective use of resources. 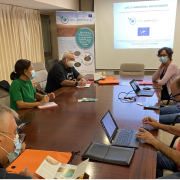 On October 28th, 2021, LIFE-AgremSO3IL representatives met in Águilas with the councilors of Agriculture and Environmental Education, Bartolomé Hernández and Ginés Desiderio Navarro, to establish the bases of collaboration to support the project dissemination activities that will be carried out next spring (2022) in the demonstration farm.

The City Council of Águilas have shown their willingness to contribute to LIFE-AGREMSO3IL transferability among the agricultural sector in the municipality, demonstrating their commitment and interest in the implementation of technologies that will contribute to the environmental sustainability of agricultural practices. 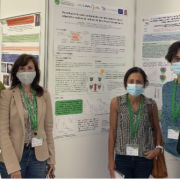 The LIFE-AgremSO3il project participated in the 16th edition of the SECH Conference organized by the Spanish Society of Horticultural Sciences and held in Cordoba between 17th and 22th October. AgremSO3IL communications were presented to the event’s audience during the speed presentation poster organized in the Crop Protection session of the conference.

The Spanish Society of Horticultural Sciences (SECH) was established in 1981 with the aim of promoting and encouraging national and international interest in scientific research, dissemination and training in all branches of Horticulture. 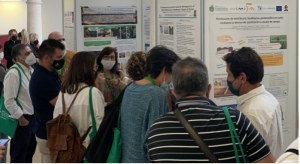 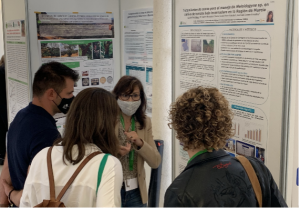 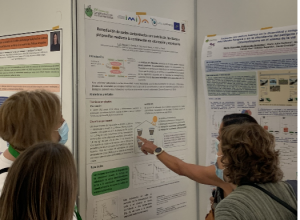 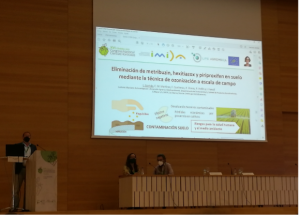 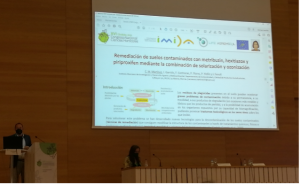 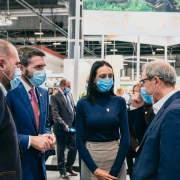 Novagric attended this great event with more than 65,000 professionals from 108 countries who attended this event for the Spanish horticultural sector.
Numerous visitors came to the stand, where innovations in agriculture were shared during three intense days.

This meeting highlighted the trend towards sustainable agriculture projects and healthy eating, with projects such as LIFE AgremS03il for the decontamination of agricultural soils proving very popular. A European project coordinated by IMIDA, in which NOVAGRIC, IDConsortium and CEBAS-CSIC work together. 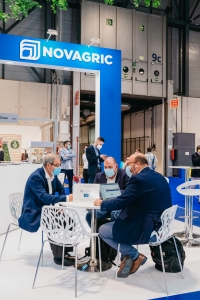 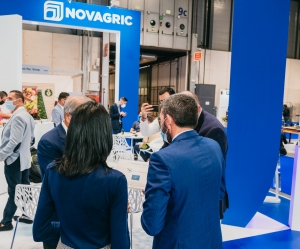